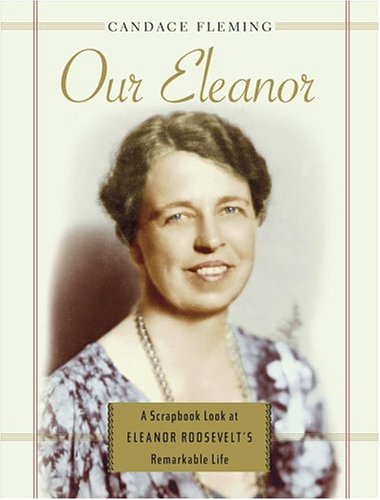 Our Eleanor: A Scrapbook Look at Eleanor Roosevelt's Remarkable Life

In this standout biography, Fleming employs the scrapbook style she debuted in for another American icon, Eleanor Roosevelt, the "first lady of the world," in the words of former president Truman. Short chapters arranged into a pastiche of narratives and deftly supported by photographs, newspaper articles, letters and humorous cartoons explore how this sad "Little Nell," as her father called her, emerged from an unhappy albeit privileged childhood to become an indefatigable champion of the poor and powerless. So controversial that she inspired "one of the largest FBI files in American history" (3,271 pages), Eleanor was also beloved by thousands of Americans, who wrote to her seeking advice or solace. Fleming documents many of the ways Eleanor herself evolved, such as how her prejudiced views on Jews changed over time, and some of the ways in which she remained faithful to herself even if it brought her pain. Eleanor's intellect attracted her charming and ambitious cousin Franklin, and their divergent approaches to life would divide them as a couple but also strengthen them as political partners. Fleming relies on the prolific words of Eleanor herself, family members, friends and observers to enhance this multi-faceted life story. The attractive design capitallizes on these various perspectives, often highlighted in different type treatments; yet the overall appearance is one of cohesion. With this approach, Fleming allows readers to draw their own conclusions; they will come away with an understanding of a woman who shaped her times and left a lasting imprint on the future. Ages 10-14.