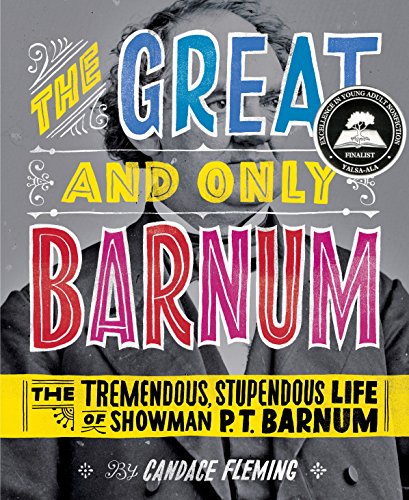 The Great and Only Barnum: The Tremendous, Stupendous Life of Showman P.T. Barnum

The life of showman Phineas Taylor Barnum gets show-stopping treatment in Fleming's ( ) latest biographical work. Presented as clever, resilient and ever-consumed with making a buck, the Barnum of the Ringling Bros. and Barnum & Bailey Circus is brought to life in anecdotes over 11 chapters. Nicknamed “Tale” as a boy, he “hated farmwork” (“I was always ready to concoct fun, or lay plans for money-making, but hand-work was decidedly not in my line”). His personal struggles with alcohol and a less-than-happy marriage are detailed alongside his many public successes (and hoaxes). A tour of his famed American Museum and an account of a day at the circus (complete with descriptions of the human curiosities Barnum employed) set readers in the middle of the singular late 19th-century entertainment scene. As in a real circus, the large-format pages include plenty to grab readers' attention: white-on-black sidebars that put the entrepreneur's feats in context (“African Americans were barred from entering Barnum's American Museum except on certain days”), b&w photos and advertising posters. Audiences will step right up to this illuminating and thorough portrait of an entertainment legend. Ages 8–12.