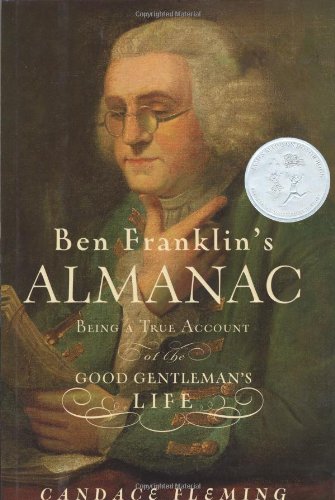 BEN FRANKLIN'S ALMANAC: Being a True Account of the Good Gentleman's Life

Fleming () apes the design of Franklin's with her clever format here, to "illuminate each of the many facets" of her subject (as the author states in a foreword). Organized into chapters on larger themes, such as "Boyhood Memories" and "Tokens of a Well-Lived Life," the handsome oblong volume offers concise, engaging "bits and pieces" that both offer a broader context for Franklin's life events and specific insights into his character. For example, a piece called "The War Before" (in the "Revolutionary Memorabilia" section) describes how the aftermath of the French and Indian War helped fuel the colonists' anger and pave the way for the Revolutionary War; and an account in "Souvenirs from France" tells how Franklin outwitted spies to force a French alliance in that war. Throughout, pen-and-ink portraits, black-and-white etchings, humorous cartoons and facsimiles of newspaper and book pages (including his own and help bring the man and his time to life. A generous peppering of primary source material allows Franklin's wit and personality—and contradictions—to emerge. Franklin sings the praises of his wife, Deborah, in a poem ("Of their Chloes and Phillisses poets may prate/ I sing of my plain country Joan/ Now twelve years my wife, still the joy of my life/ Blest day that I made her my own") yet for the last 17 years of her life, the two were separated by the Atlantic Ocean. Fleming's carefully chosen details shine light on Franklin's roles, from postmaster of Philadelphia, "president of Pennsylvania" and national abolitionist, to inventor, editor of the Declaration of Independence and experimenter with electricity. An opening timeline helps keep the chronology straight (an index is provided, too). While the volume's layout encourages readers to dip in and out, Fleming delivers a cohesive and complex portrait of a brilliant, productive and shrewd man who helped shape this country. Ages 10-14.