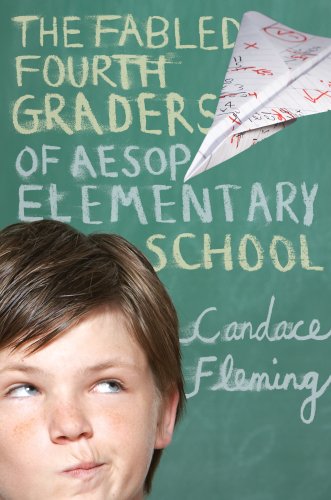 A rowdy group of students and their eccentric teacher star in Fleming's ( ) collection of determinedly loopy vignettes, each of which ends with an Aesop-like moral. On the day before school opens, the frantic principal still has not found a teacher for the notoriously unruly fourth graders. In walks Mr. Jupiter, whose credentials include working as a translator for Bigfoot, discovering the lost city of Atlantis and studying at the Coochie-Coochie Institute for Misbehaved Monkeys; he is hired on the spot. When he refuses to react to his students' misbehavior, they think up pranks guaranteed to rile him, but no one dares to pull them off (moral: “It is one thing to talk about it, another to do it”). In another tale, a boy who is struggling with math wishes he were back in kindergarten, where tasks were easier, but then is forced to participate in humiliating activities when he goes to help out with the younger class (“Be careful what you wish for—it might come true”). Packed with puns of varying cleverness, the fables range from pithy to protracted, the morals from spot-on to strained. Even with the inconsistencies, there's plenty to laugh at and even to ponder. Ages 7-11.