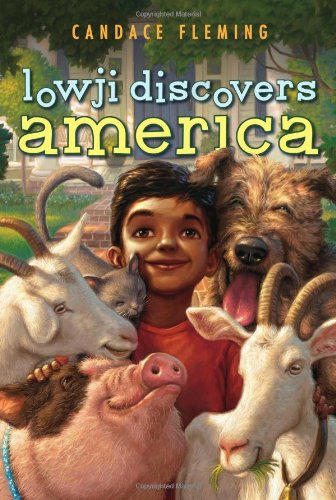 Fleming's ( ) warm if somewhat slow-paced novel introduces an affable nine-year-old narrator who moves with his parents from Bombay to Hamlet, Ill. Lowji immediately notes the differences between his old and new life: "Hamlet, I see, is small and quiet. I am not used to small and quiet.... I am used to honking cars and rattling trains and double-decker buses that raise clouds of hot, dry dust." The boy sorely misses his best friend and longs for a pet, but the cranky owner of their apartment building does not allow them. Lowji cleverly finds a way around this rule: after convincing Landlady Crisp to get a cat to catch the building's mice, a dog to scare off burglars who are breaking into homes in town and goats to help trim the grass while her lawn mower is broken, he volunteers to pet-sit. Though the boy and his family primarily spoke English in Bombay, Lowji enjoys using the new American expressions he learns, and sprinkles the narrative with Indian words (collected in a concluding glossary). In a happy development that readers will see coming, Lowji makes a friend in the end and is thrilled when the coriander and curry seeds he brought from his homeland finally sprout, proving—with satisfying symbolism—that plants from India can indeed "grow and flourish" in American soil. Ages 7-11.