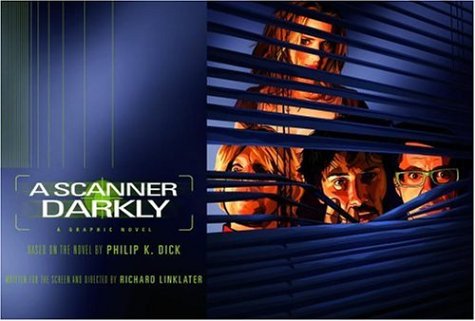 Described as being "like a graphic novel come to life," the 2006 film version of Dick's classic 1977 novel is a full-length animated feature directed by Richard Linklater using rotoscope visual technique. In rotoscoping, filmed actors are digitally transformed into drawings. The graphic novel version of the film consists mostly of direct screen grabs from the animated version. Harvey Pekar has added some narration that has been adapted from the novel. The books and film tell the story of a futuristic Southern California in which drugs are rampant and identity mutable. Keanu Reeves plays an undercover cop who has to spy on and understand the druggy circles around him. The film looks intriguing, but the graphic novel version falls asleep instead of coming to life. Simply arranging film stills on a page to resemble comic book panels does not a narrative make. And while the dialogue seems mostly drawn from the film, the narration, intended to bridge the gap between watching action unfold and reading it, is incongruous and sometimes nonsensical in this setting. This bizarre hybrid is no substitute for Dick's original and will serve best as a reminder of the film.