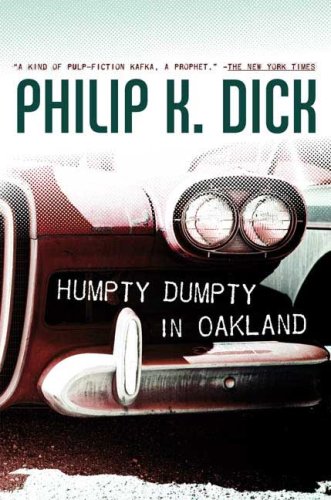 Fans of late SF icon Dick (1928–1982) who have yet to discover his obscure nongenre works will be pleasantly surprised by this profound—and perplexing—1986 posthumous tragicomedy. Unpublished in the U.S., this tale revolves around two truly miserable characters: Jim Fergesson, a world-weary, ailing garage owner preparing to retire, and Al Miller, a shiftless used car salesman who rents lot space from Fergesson. Learning that Fergesson is investing his life savings in a questionable real estate venture, Miller hatches a series of ill-conceived and delusional schemes he hopes will grant him some sort of redemption and save Fergesson from getting scammed. Evoking the economically booming, socially repressive and prejudiced America of the 1950s, this paranoid and ambiguity-filled exploration into the psyche of the small businessman showcases not only Dick's wild imagination and sardonic wit but also, and most notably, his mastery at intertwining perception with reality.