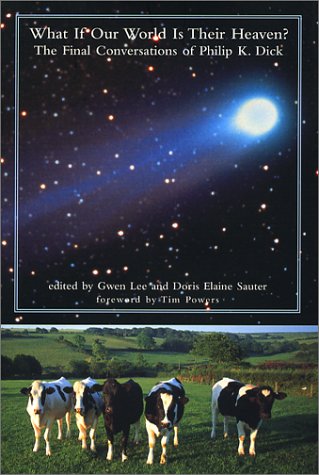 WHAT IF OUR WORLD IS THEIR HEAVEN?: The Final Conversations of Philip K. Dick

With his Hugo Award–winning (1962), Philip K. Dick commenced his reign over literary sci-fi, presiding with innovative, philosophical narratives. At 53, the cult figure was verging on Hollywood celebrity with , adapted from (1968), but he died in 1982, before the film's release. Sauter, whose introduction describes their friendship, introduced him to Lee, who recorded Dick weeks before his death. After 18 years, these transcripts bring fresh insights—notably, into the imaginative biotech plot line of the unwritten . (Lawrence Sutin culled the novel's prospectus from Lee's tapes for his Dick biography, .) Dick also discusses music, writing, philosophers and his 1974–1975 mystical visions, when the revelation of his son's undiagnosed birth defect—"down to anatomical details"—saved the child's life. He lived to see 20 minutes of scenes, and responds enthusiastically and extensively to features like the "400-story police building that dominates the landscape" and the punk rock extras ("these are not actors. Nobody looks sinister. Except the people who that sinister"). Several misspelled names are a minor annoyance amid the exuberant thought processes ricocheting around this book, deemed in a foreword by SF novelist Tim Powers () a "vivid portrait" of a writer who chose creative intensity over healthy blood pressure, and ultimately "killed himself"—through overwork—for his art. ()