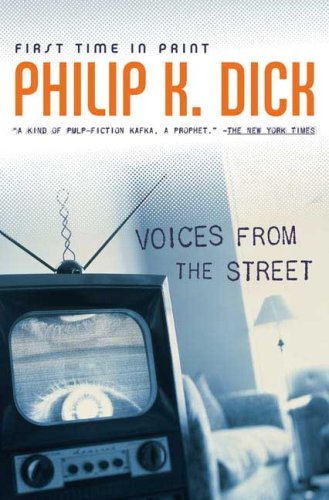 Voices from the Street

This previously unpublished novel is remarkable for a number of reasons, probably the least of which is novelistic merit. Stuart Hadley is a young man born to privilege; he is handsome and educated; his pregnant wife is devoted to him; he has worked his way up from salesman to manager of a television and radio shop, but he wants more. The more he wants is not clear, even to him, and his existential crisis involves him with a shady, quasi-religious sect, the Society of the Watchmen of Jesus, led by a charismatic evangelist. Stuart's flirtation with the movement soon leads him away from his placid middle-class life into a sinister association with a mysterious femme fatale, Marsha Frazier. His decline is accelerated by psychotic depression that spirals into life-threatening self-destruction.

Like much of Dick's fiction, the plot skims ambiguously along an abstract surface, only occasionally revealing concrete motivation or linear connection. But that's what endears Dick's novels to millions of readers nearly 25 years after his death, and that's what makes him a significant postwar American novelist. Shallow characterization and crude dialogue show a young novelist groping for style. Still, echoes of Dick's contemporaries such as Ralph Ellison, Richard Yates, Rod Serling, Raymond Chandler and early Kurt Vonnegut Jr. resonate, and a bonus exists in Dick's impeccable eye for detail. Apart from creating an ambience that complements the novel, he provides a veritable literary museum of the early 1950s, replete with the period's social and political attitudes and dozens of references to everyday items, commonplace practices that underscore and illuminate this significant transitional period in American culture. Literary critics will have a field day; Dick fans will be in rapture.