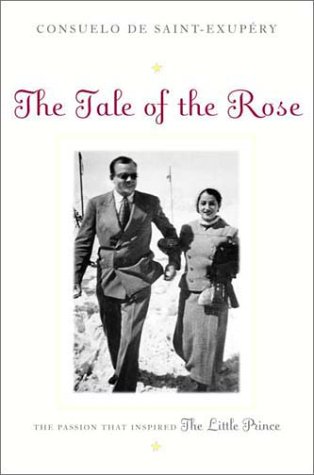 THE TALE OF THE ROSE: The Passion that Inspired The Little Prince

Twice widowed and not yet 30, Consuelo Suncin married the dashing young aviator Comte Antoine de Saint-Exupéry in 1931. As depicted in this posthumous memoir (written in 1945, it lay undiscovered until the 1990s), they were an impossible couple: childlike and terminally irresponsible, Saint-Ex (as his friends called him) broke engagements without a word to disappear for months. Consuelo—sometimes naïve, often egotistical, and always temperamental—frequently exploded in nervous fits (one acquaintance described her as "Surrealism made flesh"). From Buenos Aires to Casablanca, Paris and New York, they failed to establish a home for themselves; Saint-Ex repeatedly fled the constraints of marriage, only to find he could not write without his wife's support and inspiration. She, for her part, loved him too much to leave him for good. Friends described Consuelo as a charming storyteller, always ready with a vivid observation ("She had the face of an umbrella" is her stab at a suspected rival). At its most heartrending, this book tells the story of a proud, charismatic woman who lived only for her husband, following him from continent to continent as he deceived and neglected her, then pleaded for her return when he began writing again. In 1943 he wrote , immortalizing Consuelo as the Prince's beloved Rose, too proud and thorny to admit her pain at his departure. A year later, the aviator disappeared over the Atlantic. For his many devotees, this memoir will offer an intimate glimpse of the strange and passionate life behind his mysterious work.