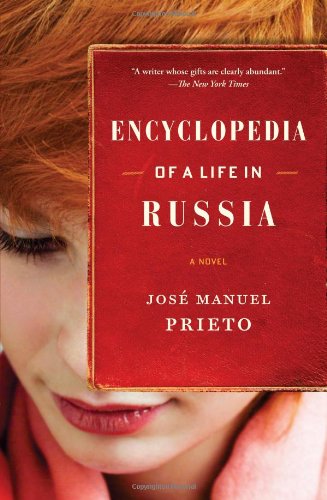 Encyclopedia of a Life in Russia

Playing off of its title, Prieto’s formally audacious novel (after Nocturnal Butterflies of the Russian Empire) is divided into 26 chapters, organized from A to Z, after a prologue, called “Encyclopedia,” wherein first-person narrator and hero Thelonius Monk (not the music legend) arrives in Russia. Thelonius shares storytelling duties with a cheeky omniscient narrator who may or may not be the author. He, to the reader’s delight, turns out to be an explorer of words, just as Monk is an explorer of fame (and his namesake was an explorer of music). Chapters are broken into mock, though actually informative, encyclopedia entries that conform to each letter and include numerous references to other entries, urging readers to flip back-and-forth and creating an ever-deepening picture of the whole. “H,” for example, is full of droll flights of narrative fact and fancy about Hand-Axes, Hard Frosts, and Hippolyte, woven into the leisurely forward movement of the low-stakes story: Thelonius meets a young woman named Linda Evangelista (not the supermodel; in fact, her real name, according to her entry in “L,” is Anastasia Stárseva) and, after a brief affair and briefer correspondence, he takes her to Yalta, where she records his daylong rooftop speech about “the unbearable beauty of the world.” Though Prieto’s plot is consciously frivolous, it has genuine resonance in the age of celebrity, and it bubbles with energy and mischief. Quirky and consistently surprising. Agent: The Wylie Agency. (Jan.)
close
Details