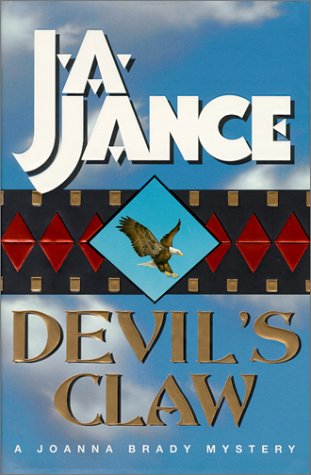 Southwestern mysteries continue to grow in popularity, with Jance's series, set in southern Arizona, one of the strongest entries in the subgenre. The new novel to feature Sheriff Joanna Brady opens at the entrance to a desert canyon called the Cochise Stronghold, where Sandra Ridder, who is part Apache, is trying to retrieve an item she buried eight years ago, before going to prison for killing her husband. The next day hikers find her corpse, while Sandra's 15-year-old daughter, Lucinda, and the girl's pet red-tailed hawk go missing. Could Lucinda, who seems to be a troubled loner, have killed her mother as revenge for her father's murder? Joanna starts to investigate shortly before she's to be married. Then Clayton Rhodes, the neighbor who helps feed Joanna's animals, dies suddenly, and unexpectedly bequeaths his ranch to her. Clayton's estranged daughter feels she should have inherited the property. Unreasonably and viciously, she blames Joanna for exerting undue influence over her father. The tangled threads of Joanna's personal life come close to overwhelming her professional one, and she has to exercise all of her time management skills to keep the murder inquiry on track. Her fianc , Butch Dixon, comes off as way too perfect to be human, but his parents, in an amusing touch, are seriously dysfunctional. Sometimes the dialogue is stiff, but generally this is a solid installment in a worthy series. The Arizona desert, as usual in Jance's mysteries, plays an unforgettable part in this atmospheric tale. Mystery Guild dual main selection. (July)
close
Details