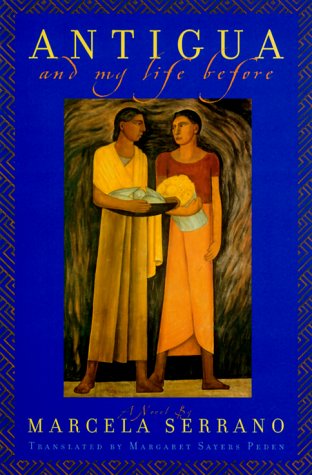 Antigua and My Life Before

In part a feminist colloquy between two contemporary Latin American women, this third novel by award-winning Chilean writer Serrano is a compelling account of their interwoven lives. Serrano's prose is filled with phantasmagoric descriptions and suffused with the lush lyricism that distinguishes the work of Carlos Fuentes and Isabel Allende. The protagonist, Josefa Ferrer, a famous singer happily married and mother of three, has been a friend since childhood of Violeta Dasinski, an architect returned to her homeland of Chile from a wandering exile abroad with her husband, who has abandoned her and her baby daughter Jacinta. Violeta meets Eduardo, a writer in his 50s who wants a wife to support his creativity, and since Violeta yearns for another baby, she accepts his candid marriage proposal. The story is told in flashbacks that are not always sequential but that suspensefully enlarge the dual portrait. It opens in Santiago, with Violeta's sudden, front-page act of violence that has Josefa coming to rescue her friend's diaries from the police-guarded home, determined to tell Violeta's story, and her own. Josefa regrets not having foreseen that Violeta's pregnancy would enrage the abusive Eduardo, and as she reads and remembers the struggles, torments and delights that Violeta and she experienced throughout their lives, she is increasingly honest about her own continuous stage fright, career insecurity and lack of time and energy for her family. She is, moreover, convinced that her husband is unfaithful. The latter part of the novel is a paean to the Guatemalan city of Antigua, ""a corner of the world where history has stopped,"" where female ancestral spirits assure Violeta, who eventually moves there, and Josefa, who visits, of the two women's power to find second chances to control their own destinies. With a dramatic plot and rich language, this is a stirring novel that inspires with its political astuteness, feminist ideology and literary quality. (June) FYI: Serrano's first novel, Para que no me olvides, won Santiago's Literary Prize, and her second book, Nosotras que nos queremos tanto, won the Sor Juana In s de las Cruz, awarded to the best Hispano-American novel written by a woman.
close
Details