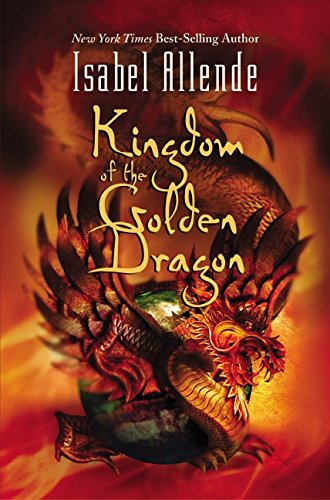 KINGDOM OF THE GOLDEN DRAGON

Fans of Allende's action fantasy will be eager to sink their teeth into this equally tantalizing sequel. If the first book focused on environmental themes, this one takes on a strong spiritual flavor. Here Alexander (who has just turned 16) and his journalist grandmother, Kate, are off to the Himalayas accompanied by Brazilian native Nadia Santos (Eagle), whom they met during their excursion to the Amazon in the previous novel. Their mission is to find out about the Forbidden Kingdom, a remote mountain country that holds the invaluable Golden Dragon, a jewel-encrusted statue with magical powers. Alex and his companions are welcomed into the Kingdom of the Golden Dragon, a place where greed, hostility and crime do not exist. While they are becoming acquainted with the benevolent king, a master thief and crew of evil "Blue Warriors" carry out a scheme to steal the precious statue and kidnap the king along with some young women of the village. Before long, Alexander finds himself once again tangled up in a dangerous quest as he sets off to retrieve the Golden Dragon and save the lives of the hostages. As the author promotes ideals of compassion, forgiveness and asceticism, she expertly blends all the ingredients of a great epic adventure. Her complex heroes, suspenseful tests of courage and the mystic aura that surrounds the story add depth and excitement to a classic battle of good versus evil. Ages 10-up.