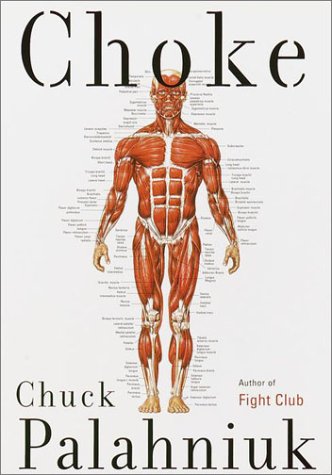 Palahniuk (; ) once again demonstrates his faith in the credo that before things get better, they must get much, much worse. Like previous Palahniuk protagonists, Victor Mancini is young and prematurely cynical, a med school dropout whose eerily detached narration of the banal horrors of everyday existence gives way to a numbed account of nihilistic carnage. Cruising sex-addict meetings for action, Victor enjoys bathroom trysts with nymphomaniacs on short prison furloughs, focused on maximizing his sexual highs. During the working day, he is trapped in a 1734 colonial theme park, where the entire self-medicated staff blearily endures abusive school tours while hiding out from the world. Victor supports his mother, who is in the hospital, stricken with Alzheimer's; she is wasting away, and despite the misery she put him through in childhood (revealed in an increasingly horrific series of flashbacks), he wants to be a good boy and take care of her. This becomes challenging when Victor is seduced by a strange hospital worker calling herself Dr. Marshall, who shows him his mother's diary; it describes her self-impregnation by a holy relic she believes to be the foreskin of Jesus. This has a profound effect on Victor, who is stunned by the possibility that there may be some good in him after all. Victor is even more pathetic than Palahniuk's previous antiheroes, in that the world he creates for himself (a carnivalesque mélange of theme park, geriatric ward and asylum) is actually more horrific than the one he seeks to escape. Still, the novel showcases the author's powers of description, character development and attention-getting dialogue handily enough to give this dark meditation on addiction a distinctive and humorous twist.