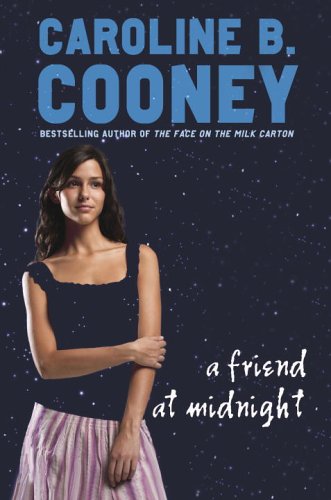 A Friend at Midnight

Cooney's ( ) latest tale starts with a jolt of adrenaline: an unnamed adult takes Michael to the airport, says something so terrible the boy knows "right away that he must not think about it," and drives off, leaving the youngster without money or an airline ticket. The boy must make his own way back to the New York suburb where, until just a few weeks ago, he lived with his mother, stepfather, two sisters and toddler half-brother. Several pages later Cooney reveals that Michael is just eight years old and the man who abandoned him was his own father, Dennis, who coolly explains, "You're not the son I had in mind." Riding to the rescue is Michael's sister Lily, 15, who manages to get her brother home without any adult help and, when Michael asks her to, promises never to tell what their father did and said. Horrifying though Michael's situation is, this is ultimately Lily's story, one that centers on her heart-splitting struggle to balance her loyalty to Michael's wishes with her fierce desire to reveal the ugly truth about their father. Matters come to a head a year later, when Lily's older sister, determined to have Dennis participate in her upcoming wedding, tries to insist that Lily make peace with their father. Wrathful, courageous, resourceful, loving and even occasionally light-hearted, Lily is a bracingly refreshing heroine. Ages 12-up.