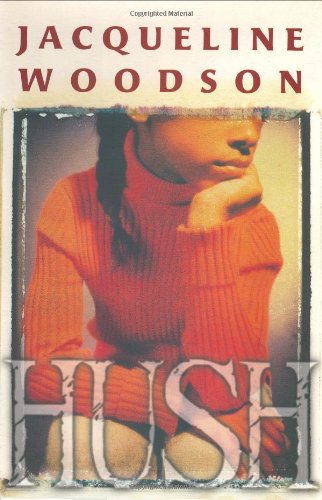 When Toswiah Green's father, witness to a murder, does the right thing by testifying against two fellow police officers, he puts his entire family in danger. Now the Greens have fled for their lives, leaving behind all that is comfortable and familiar for the alien existences laid out by the witness protection program. Shifting between past and present, Woodson's (; ) introspective novel probes the complex reactions of 12-year-old Toswiah as she reluctantly reinvents herself as Evie Thomas. Telling lies about her past is as awkward for Toswiah as her adjustment to a new apartment, city and school, but most disturbing of all is the fragmentation of her formerly close-knit family. Toswiah's mother, searching for meaning and for support, becomes an avid Jehovah's Witness. Mr. Green slips into suicidal depression, and Toswiah's older sister, unbeknownst to their parents, arranges to enter college at 15. "Evie/Toswiah Thomas/Green," as the narrator once refers to herself, taps hidden stores of inner strength, ultimately realizing that "I am no longer who I was in Denver, but at least and at most—I ." Readers facing their own identity crises will find familiar conflicts magnified and exponentially compounded here, yet instantly recognizable and optimistically addressed. Ages 10-up.