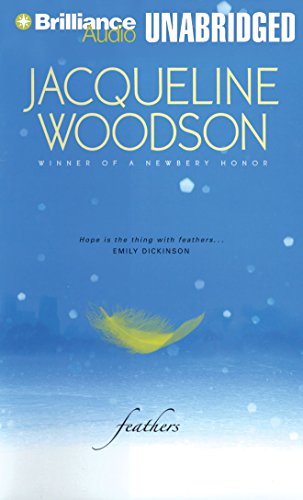 The narrator of Woodson's 2008 Newbery Honor title is fascinated with Emily Dickinson's famous couplet “Hope is the thing with feathers/ that perches in the soul.” Frannie grapples with its meaning, especially after a white student joins her all-black sixth-grade classroom. Trevor, the classroom bully, nicknames him “Jesus Boy,” because he is “pale and his hair [is] long.” Frannie's best friend, a preacher's daughter, suggests that the new boy truly could be Jesus (“If there was a world for Jesus to need to walk back into, wouldn't this one be it?”). Set in 1971, the book raises important questions about religion and racial segregation, as well as issues surrounding the hearing-impaired (Frannie's brother is deaf). Johnson, who also voiced Woodson's , sensitively renders Frannie's narration, and her slow delivery affords listeners the opportunity to fully experience Frannie's keen perceptions. Subtle changes in inflections distinguish the many characters' voices in a skillful performance that enlarges the book's already wide appeal. Ages 9–up.