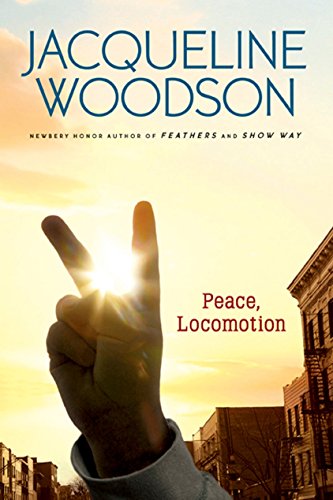 Following the character introduced in Woodson switches from poetry to letters to show how 12-year-old Lonnie Collins Motion, aka Locomotion, maintains a bond with his younger sister, Lili. He reminds her of their past: “There was a time before your foster mama came and said, 'I’ll take the little girl but I don’t want no boys.’ ” Besides missing his sister and their late parents, Lonnie has other problems to cope with (his foster mother’s son returns from Iraq disabled and traumatized). In his letters, Lonnie shares the big and small details of his days, works through philosophical struggles (a friend tells him that “Miss Edna was my mama now”), and includes some of the tender poems he composes. Although the epistolary motif makes for some stilted writing, Woodson creates a full-bodied character in kind, sensitive Lonnie. Readers will understand his quest for peace, and appreciate the hard work he does to find it. Ages 9–12.