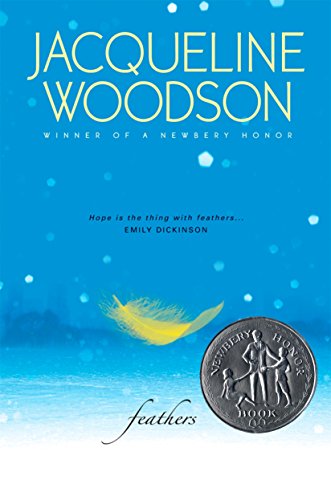 Looking forward" is the message that runs through Woodson's ( ) novel. Narrator Frannie is fascinated with Emily Dickinson's poem, "Hope is the thing with feathers/ that perches in the soul," and grapples with its meaning, especially after a white student joins Frannie's all-black sixth-grade classroom. Trevor, the classroom bully, promptly nicknames him "Jesus Boy," because he is "pale and his hair [is] long." Frannie's best friend, Samantha, a preacher's daughter, starts to believe that the new boy truly could be Jesus ("If there was a world for Jesus to need to walk back into, wouldn't this one be it?"). The Jesus Boy's sense of calm and its effect on her classmates make Frannie wonder if there is some truth to Samantha'a musings, but a climactic faceoff between him and Trevor bring the newcomer's human flaws to light. Frannie's keen perceptions allow readers to observe a ripple of changes. Because she has experienced so much sadness in her life (her brother's deafness, her mother's miscarriages) the heroine is able to see beyond it all—to look forward to a time when the pain subsides and life continues. Set in 1971, Woodson's novel skillfully weaves in the music and events surrounding the rising opposition to the Vietnam War, giving this gentle, timeless story depth. She raises important questions about God, racial segregation and issues surrounding the hearing-impaired with a light and thoughtful touch. Ages 8-up.