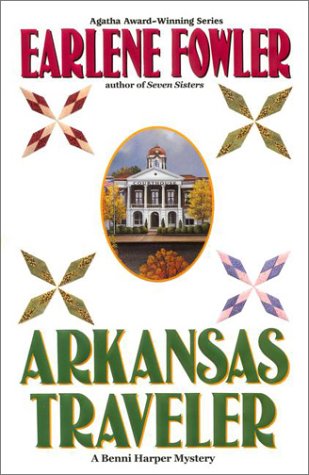 If your image of quilters is that of old ladies whiling away the hours in rocking chairs or at looms, then perhaps you've not met Benni Harper, the frisky director of the Josiah Sinclair Folk Art museum in San Celina, Calif. In her eighth winning outing (after 2000's Seven Sisters), Benni returns to her hometown of Sugartree, Ark., accompanied by her friend Elvia, and finds relatives and friends embroiled in racial, religious and romantic rivalries that turn their reunion into disunion. Sugartree, population 5,000, has its share of bigots, hidden and overt, and two events have already stirred them up. Benni's friend Amen Tolliver, a black woman, is running for mayor against wealthy white incumbent Grady Hunter. And Sugartree's two Baptist churches, one black, one white, are discussing a merger that has deeply divided both congregations. Being Hispanic, both Elvia and Benni's husband, Gabe Ortiz, attract unwelcome attention after Gabe's arrival, threatening the blooming romance between Elvia and Benni's cousin Emory. When the ugliness leads to murder, Amen's election chances are jeopardized and an innocent young man is arrested. However, there are also plenty of decent people in Sugartree and a lot of great food, memories and humor. Benni needs all her vaunted spunk to solve a killing that threatens to scar the town she loves, as Fowler delivers cozy entertainment without resorting to unrealistically syrupy solutions. (Apr. 10)
close
Details