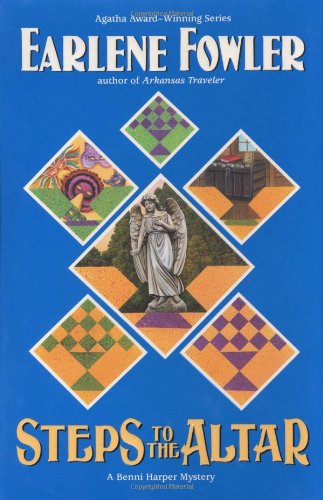 STEPS TO THE ALTAR

In a story sewn together as tightly as a traditional quilt, Agatha Award–winner Fowler delivers superior cozy entertainment in her ninth Benni Harper mystery (after 2001's ). In the California coastal town of San Celina, there are weddings and wished-for weddings, plus the threatened demise of Benni's two-year marriage to police chief Gabe Ortiz, brought about by the appearance of Gabe's former female partner, Del Hernandez. Just as Benni doesn't think she can keep one more plate spinning in her busy life, two crises crop up: first, Del starts deliberately going after Gabe—and lets Benni know it; second, Benni is asked to inventory four trunks full of materials possibly related to the decades-old bludgeoning death of wealthy Garvey Sullivan. Though asked only to catalogue the items, Benni becomes fascinated by the potential murder charge against Maple Sullivan, Garvey's widow. Maple fled before her husband's body was found, but she's been found "guilty" in the town's conscience and gossip ever since. Will Benni solve the old murder? Will her marriage survive the lust of Del Hernandez—and the come-ons to herself from an acerbic sheriff's deputy? Will her best friend, cousin and grandmother all make it to their respective altars, fulfilling the prophecy of the Steps to the Altar quilt made for one couple? The answers to these questions make delicious reading, with plenty of passion, snappy dialogue and a whiz-bang plot.