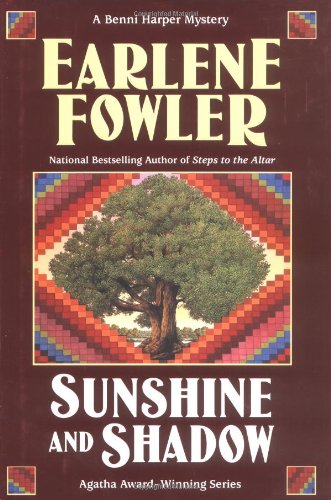 Agatha Award winner Fowler offers two parallel plots to dramatize the alternating light-and-dark theme of her 10th beguiling mystery to feature Benni Harper, the San Celina, Calif., amateur sleuth and folk art museum curator. The first is set in 1978, when she's married to rancher Jack Harper; the second in 1995, when she's married to police chief Gabe Ortiz, whom she almost lost to Gabe's old lover Del Hernandez in her previous outing, (2002). In the "present" of 1995, when mystery writer and one-time San Selina resident Emma Baldwin loans a crazy quilt for display at the folk art museum, Benni is excited, though the quilt brings back mixed feelings about Jack. Then, shortly after arriving in town on a hush-hush case, PI Luke Webster, a former LAPD pal of Gabe's, gets stabbed to death. Frightening attacks on Benni's truck, creepy phone calls and hate mail follow. Benni must draw on all her crime-solving skills to find the pattern in the clues presented in this ingenious mystery. The overabundance of incidental detail may put off some, but most readers will relish the author's appealing picture of ranch life and small-town affairs, of barbecues and fiestas, of jocular locals and warm family and friends.