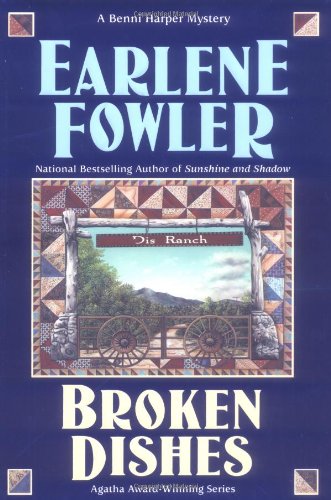 In Fowler's 11th Benni Harper mystery (after 2003's ), one of the best yet in this well-written cozy series, quilter Benni comes to the rescue of Shawna and Johnny Abbot, the new owners of the Broken DIS (aka the Broken Dishes) cattle ranch, now converted to a guest ranch. The opening of the retreat goes smoothly, until a makeshift grave is discovered during the ladies' first trail ride. Finding a dead body, albeit skeletal, around Benni is nothing new, and neither is the arrival of Detective Ford "Hud" Hudson—their paths have crossed before, and not to the liking of Benni's luscious Latino hubby, Police Chief Gabe Ortiz. Gabe's presence at the Broken Dishes insures more testosterone-fueled battles than the ones already boiling between Johnny and head wrangler Whip. Rumors that a syndicated travel critic is secretly among the ranch's first guests add to the staff's already abundant distress, and tempers and tensions stretch to their absolute limits. Plenty of exciting PG-rated action—some mild flirtation and innuendo is as sexy as it gets—will keep the reader turning the pages, while Fowler's sense of humor crops up in character names like Kitty Katz and Bunny Hopp, as well as in Benni's wise and witty personality.