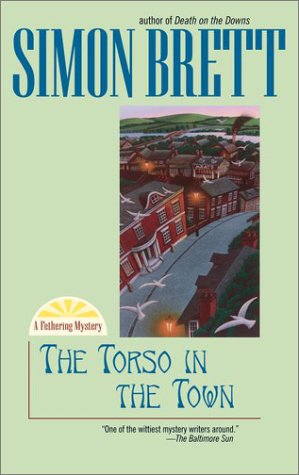 THE TORSO IN THE TOWN: A Fethering Mystery

British veteran Brett demonstrates that his mordant wit has not lost its power to amuse in this third Fethering mystery (after 2001's ). Standoffish Carole Seddon is nursing her wounds over the failure of her love affair with local barkeep Ted, while her neighbor and partner in crime-solving, Jude, is invited to a dinner party in nearby Fedborough. When one of the Roxby children, 15-year-old Harry, finds part of a dead body in the cellar of Pelling House, which the lad's family has recently moved into, Jude determines that investigating the crime is just the thing to get Carole back out of her shell. Her interest caught, Carole helps Jude delve further into the mysterious female "torso in the town," as they're calling it in Fedborough. Could the torso be the remnants of Virginia Hargreaves, once the wife of local character Roddy Hargreaves? She hasn't been seen in Fedborough in three years, which is how long ago the experts say the victim died. Carole and Jude push their noses further and further into the business of Fedborough to dig up any little secrets that could have a bearing on the crime. Brett uses their nosiness as a vehicle for a merry skewering of middle-class pretentiousness, while presenting a dandy whodunit. Readers who have been missing the author's Charles Paris and Mrs. Melita Pargeter will find much to amuse them in this delightful new series.