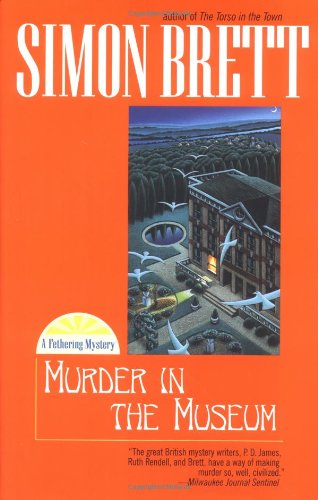 MURDER IN THE MUSEUM: A Fethering Mystery

In Brett's fourth chatty, genteel Fethering mystery (after 2002's ), Carole Seddon finds herself a member of the Bracketts Trust, which is responsible for the upkeep of Bracketts, former home of West Sussex litterateur Esmond Chadleigh. Tension arises between the Trust's new director, Gina Locke, who represents the new world of "management structures," and former trustee Sheila Cartwright, who's from the old school of local volunteers. While they wrangle over Bracketts's future, a skeleton turns up in the garden. Though it's obviously been there a long time, Sheila does her best to keep this disturbing find quiet. When a female American academic shows up to research a new biography of Chadleigh, she's stonewalled by the Trust's dawdling biographer-elect and grandson of the author, Graham Chadleigh-Bewes. Clearly something more than mere footnotes is being concealed. Eager to ferret out the truth, the uptight Carole is unable to rely on her usual partner-in-detection, the liberated Jude Nichols, since Jude is looking after a dying former lover. At times, subtle character interaction, at which Brett excels, threatens to take over the novel, but the mystery gathers steam after another, fresher body appears. Even Jude and lover have a part to play in its resolution, and Brett provides a shocking revelation or two at the end to bring a proper ending to a proper story.