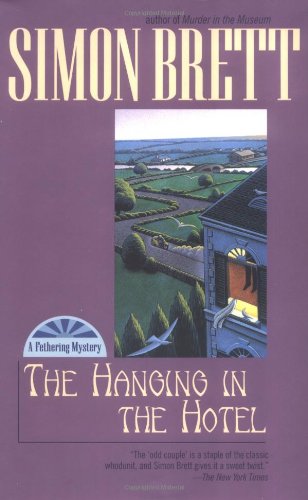 THE HANGING IN THE HOTEL: A Fethering Mystery

Prolific British author Brett's fifth Fethering mystery (after 2003's ) featuring Carole Seddon offers comfortable pacing and plenty of plot twists. Carole's pal Jude Nichols bails out an old friend by waiting tables at the Hopwicke Country House Hotel, once the playground of the very rich and very famous. Hopwicke and its owner, former model Suzy Longthorne, have fallen on hard times since 9/11, and the hotel has been forced to accept a far less sophisticated clientele, like the Pillars of Sussex men's club. The Pillars have a long and spotty history of philanthropy, but are far better known as a group of carousing gentlemen with friends in high places. When a possible inductee is found hanged in his room, only Jude believes it wasn't a suicide. The Pillars all tell the same story, the police are convinced with little investigation and even Suzy, who found a threatening note before the inductee's death, suddenly clams up. Jude turns to Carole, and the two try to untangle a tightening web of lies. The entertaining supporting cast includes a chef with attitude and a slew of solicitors, one of whom is maddeningly smitten with Carole.