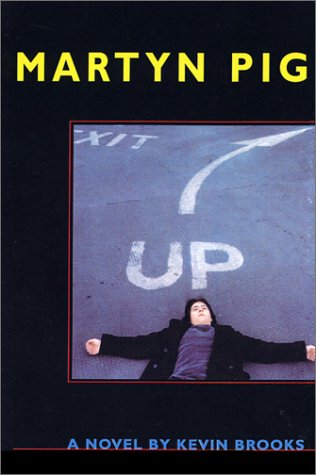 Like its eponymous hero, British author Brooks's self-assured debut manages to be at once hard-boiled, wide-eyed and—despite its downright grisly subject matter—laugh-aloud funny. When Martyn Pig accidentally kills his slovenly and abusive alcoholic father several days before Christmas, he decides not to call the authorities: he is afraid the police won't believe him and, besides, he doesn't want his aunt given custody of him. An avid reader of murder mysteries, he instead works with his next-door neighbor (and secret crush), the aspiring actress Alex, first to hide the death, then dispose of the body. As if the plot weren't already thick, Martyn soon discovers that his father recently inherited a handsome sum of money. Just when it seems that Martyn is coolly transforming himself into a junior version of Patricia Highsmith's Ripley, the story takes another hairpin turn. The crisp, perceptive storytelling, like the works of writers Martyn admires (Raymond Chandler, Agatha Christie), indirectly but unmistakably raises moral questions. One minor frustration: although the novel is set in England, inconsistent editing has sprinkled the landscape with disorienting Americanizations (e.g., Martin scrounges up "a dollar here, fifty cents there" for bus fare and shops at a CVS drugstore). Happily, these discrepancies don't dim the substantial pleasures of this satisfying and oddly buoyant story. Ages 10-up.