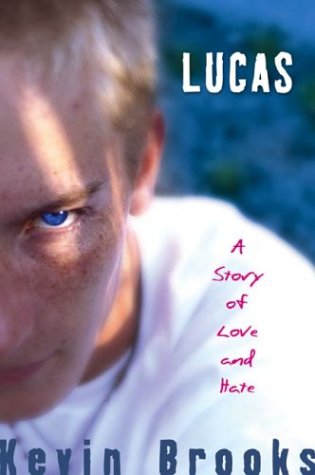 Brooks's () second novel is an ambitious and intricately crafted tale of love and resurrection that more than lives up to its eye-catching packaging. Growing up on a beautiful but isolated island off the English coast, narrator Caitlin, 15, is deeply ambivalent about the onset of adolescence. Surely growing up must mean something more than making herself "look like a tart" in skimpy outfits and throwing herself into a life of recreational drug use, like many of the island's other girls. At home, her kind alcoholic father (a YA author!) has been immobilized with grief since Cait's mother died in a car crash 10 years ago. When rootless Lucas comes to the island, to camp out and live off the land, he becomes Cait's friend and stirs her heart. Lucas arouses the suspicions of the insular islanders, who (thanks to the scheming of some nearly unbelievably brutish characters) come to believe that the boy is responsible for a violent sexual assault. Although the novel can be read on one level as an unfolding, tender relationship made all the more poignant by the mob violence that surrounds it, sensitive readers may grow to suspect that Lucas may be something more than just a boy wanderer. From the titles of Cait's father's novels (; ; ) to Lucas's own comments ("You don't know my size"), teasing hints as to Lucas's mysterious background litter the narrative. Its powerful combination of big ideas and forthright narrative make this novel likely to linger in readers' minds. Ages 12-up.