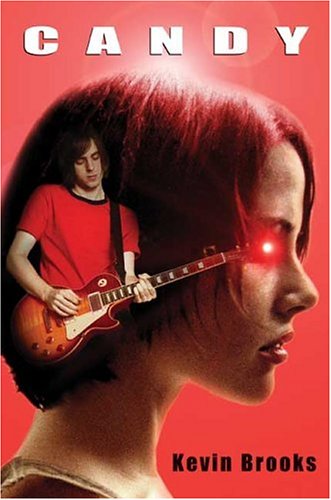 Versatile English author Brooks ( ; ) infuses his latest tale with a romantic—even mythic—grandeur sure to enthrall his fans. While in London for a doctor's appointment, suburban 15-year-old Joe (whose authentically adolescent first-person narration will immediately engage readers) encounters Candy, a bold and intoxicatingly attractive young woman. Their brief flirtation comes to an abrupt halt by the appearance of menacing Iggy (a somewhat over-the-top villain—"He towered over the table like a steel-black giant"—with a penchant for offering to give people "smiles," i.e. cut throats), who seems to have a powerful hold over Candy. Brooks does a convincing job of portraying Joe as desperately smitten, aware that his love object is a prostitute with a serious drug habit, yet pulled into her dangerous world in spite of himself. Joe passes one idyllic day with Candy at the zoo and, like an addict, spends the rest of the book in pursuit of that same feeling of bliss. He invites her to his band's gig (he's a bass guitarist) at a London club where a terrifying appearance by Iggy results in the teens ultimately fleeing to a remote cottage owned by Joe's family. The author credibly conveys scenes of Candy's withdrawal from heroin and also the underlying terror that the couple's momentary safety could shatter in an instant. Brooks offers no easy answers. This story's gritty street smarts will keep thrill-seekers more than entertained, while Joe's orphic rescue mission into the netherworld of addiction gives more thoughtful readers plenty to ponder. Ages 12-up.