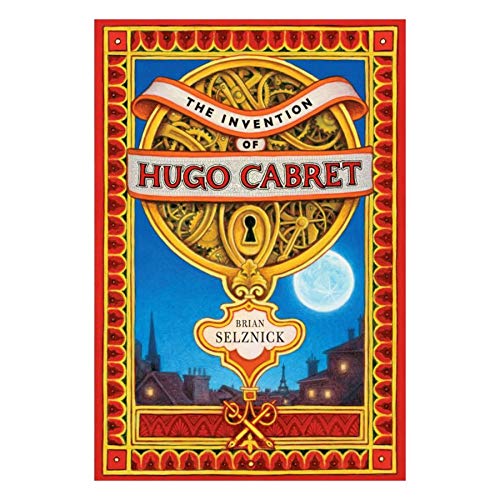 The Invention of Hugo Cabret

Here is a true masterpiece—an artful blending of narrative, illustration and cinematic technique, for a story as tantalizing as it is touching.

Twelve-year-old orphan Hugo lives in the walls of a Paris train station at the turn of the 20th century, where he tends to the clocks and filches what he needs to survive. Hugo's recently deceased father, a clockmaker, worked in a museum where he discovered an automaton: a human-like figure seated at a desk, pen in hand, as if ready to deliver a message. After his father showed Hugo the robot, the boy became just as obsessed with getting the automaton to function as his father had been, and the man gave his son one of the notebooks he used to record the automaton's inner workings. The plot grows as intricate as the robot's gears and mechanisms: Hugo's father dies in a fire at the museum; Hugo winds up living in the train station, which brings him together with a mysterious toymaker who runs a booth there, and the boy reclaims the automaton, to which the toymaker also has a connection.

To Selznick's credit, the coincidences all feel carefully orchestrated; epiphany after epiphany occurs before the book comes to its sumptuous, glorious end. Selznick hints at the toymaker's hidden identity (inspired by an actual historical figure in the film industry, Georges Méliès) through impressive use of meticulous charcoal drawings that grow or shrink against black backdrops, in pages-long sequences. They display the same item in increasingly tight focus or pan across scenes the way a camera might. The plot ultimately has much to do with the history of the movies, and Selznick's genius lies in his expert use of such a visual style to spotlight the role of this highly visual media. A standout achievement. Ages 9-12.