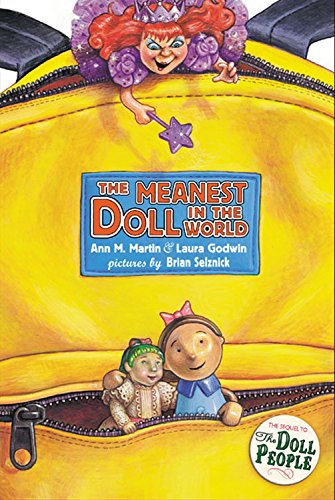 THE MEANEST DOLL IN THE WORLD

The team behind serves up a second helping of fanciful fun as they continue the adventures of two sets of dolls—the antique Doll family and the more contemporary Funcrafts. And they also introduce a deliciously evil new character, Princess Mimi, "the meanest doll in the world." Selznick previews Mimi's personality with a pencil-marred title page on which the titular villain has scratched out "Meanest" and handwritten "Greatest." A case of mixed-up backpacks causes Annabelle Doll and Tiffany Funcraft (who became best buddies in the debut title) to land in an unfamiliar boy's house where Mean Mimi rules the roost. After helping the other dolls fend off Mimi and her army (two baby dolls and Techno-Man, an "action figure"), Annabelle and Tiffany manage to return home safely. Just when they think their woes are over, they discover that Mean Mimi has followed them, determined to become the "queen of all dolls." The creative trio pulls out all the stops, from the opening scene, in which the Funcrafts ride Nora's bathtub tidal waves while glued-and-lace-trimmed Annabelle fears for her life from atop the soapdish, to Selznick's classic horror close-up of Mean Mimi's hand protruding from the backpack before stalking toward the Dolls' house. Besides carrying a relevant message to youngsters (bullies usually bring about their own downfall), this enchanting novel offers plenty of action/adventure, surprises around every corner and a plethora of detailed illustrations that depict the dolls' diverse moods and perspectives. Readers will be left yearning for another installment. Ages 8-12.