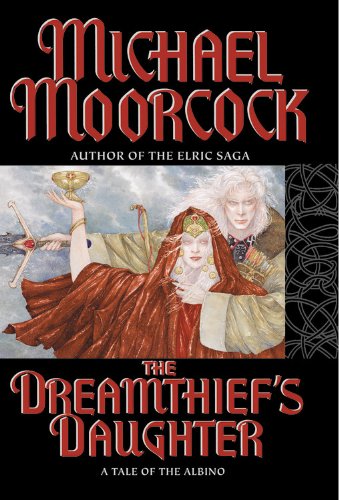 In this latest installment in his multivolume saga of the Eternal Champion, Moorcock (War Amongst the Angels) teams his favorite hero, the melancholy albino swordsman Elric of Melnibon , with Count Ulric von Bek, the last in a line of German noblemen who have made several previous appearances in the series. War is in the offing, and Hitler, having learned that the von Bek family may own both an enchanted sword and the Holy Grail itself, sends SS Major Gaynor von Minct to take possession of these mystical relics so they may be used to further the cause of the Third Reich. Von Bek and Gaynor, however, are merely the current earthly avatars of the Eternal Champion and one of his greatest foes; they are knights fighting in the causes, respectively, of Chaos and Law, in innumerable, gorgeously described, alternate realities. Von Bek and Elric, aided by the book's title character, a female archer who can take the shape of a white hare, must confront a variety of gods and monsters in an effort to preserve the balance of the Multiverse, which stands in dire danger of falling under Gaynor's control. Over the years Moorcock has produced a number of highly original genre and mainstream novels. In the Eternal Champion series, however, he has essentially been writing well-done variations on the same story for decades, gradually polishing his stylistic skill and occasionally making veiled allusions to contemporary political events. There's nothing particularly new here, but fans of the series should enjoy this addition. (Apr. 11)
close
Details