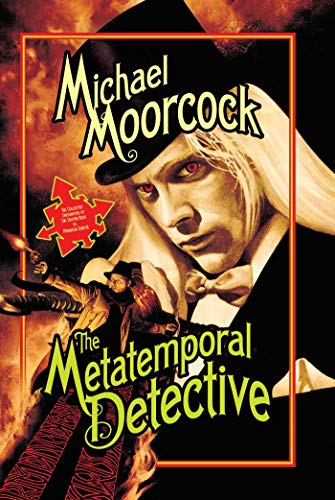 Hugo-winner Moorcock falls short in his attempt to modernize “penny dreadful” detective hero Sexton Blake, a character few present-day readers are likely to remember or recognize. Blake, now called Sir Seaton Begg, and his Watsonian sidekick, Dr. Taffy Sinclair, take on a wide variety of murder cases and other unsolved mysteries around the world, all seeming to lead back to the albino villain, Monsieur Zenith, whose original incarnation was one of the inspirations for Moorcock’s dimension-crossing antihero Elric of Melniboné. Begg’s adventures soon take him into other eras and alternate universes, where he encounters such exaggerated figures as former British government official “Mad Maggie” Ratchet and two Texas politicians and energy moguls named Dick Shiner and George Putz. The violence, perilous traps and clichés are not intended to be taken seriously, but these parodies may be too broad for even die-hard Elric fans.