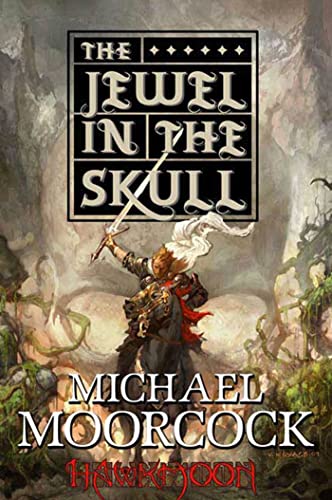 Hawkmoon: The Jewel in the Skull

This classic sword and sorcery novel from 1967 finds a shattered future Europe recovering from the “Tragic Millennium” spent under the control of the overtly evil Dark Empire of Granbretan. The reclusive Count Brass, lord of the former French region Kamarg, enrages the empire when he spurns an offer of alliance. Imperial envoy Baron Meliadus sends defeated rebel Dorian Hawkmoon to kidnap Brass's daughter, Yisselda, but Hawkmoon's inherent morality, his own infatuation with Yisselda, and Brass's kindness lead Hawkmoon to ally with Brass though he knows it spells his own doom. This novel is quite short by modern standards, giving the story a compressed and distilled effect. There is little space for nuanced politics or any depth of characterization, but the action is extremely fast-paced, and Moorcock fits more plot into 224 pages than other authors manage in a dozen volumes.