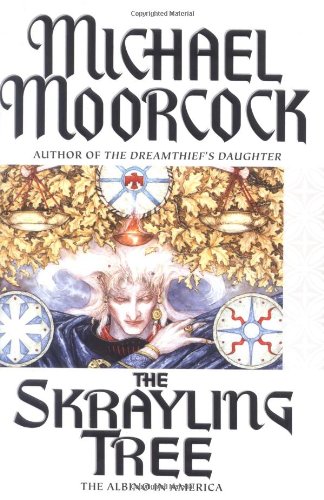 THE SKRAYLING TREE: The Albino in America

In this engrossing sequel to (2001), Moorcock weaves history, myth and alternate realities into a seamless whole. In 1951, Oona, the Dreamthief's daughter, and her albino husband, Ulrik von Bek, are enjoying a much needed vacation in Nova Scotia when Indian warriors kidnap Ulrik and drag him into the sea. Oona's search for Ulrik leads her through a maelstrom and into an America nearly 1,000 years in the past. At the same time, Oona's father, the albino Elrik of Melniboné, who is soul bonded to Ulrik, faces disaster. In a desperate attempt to save himself, Elrik dreams himself into the same mythic past in search of the beings who forged his black sword. Ulrik, meanwhile, learns that he was not so much kidnapped as recruited to save the multiverse. The tale's power stems largely from the astounding lyricism of the author's prose, the only flaw being the sometimes stilted and overly expository dialogue about the nature of the multiverse. Yet without these explanations, the complexity and mechanics of Moorcock's creation would confuse many readers, particularly those new to the series. An epilogue promises another installment, which should make fans of well-written and highly original fantasy extremely happy.