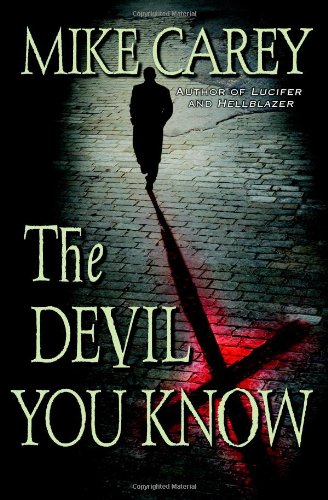 The Devil You Know

A violent ghost in a world where spirits are rarely mean-spirited is a clue to a deeper mystery in this engrossing dark fantasy debut from comics-writer Carey. Felix “Fix” Castor is an itinerant exorcist who (like a certain famous group of Hollywood ghost-evicters) alternates between dispatching spooks and doing stage magic at ungrateful children's birthday parties. When he's summoned to end a haunting at London's prestigious Bonnington Archive, he finds a vengeful specter with a blood-veiled face that resists methods for extirpating the usually docile dead. When Castor begins probing more deeply, he quickly finds himself harassed by a ravenous succubus, a belligerent fellow exorcist and a slimy Eastern European pimp. The resolution of this ingeniously multilayered tale will satisfy fans of both fantasy and detective fiction. Fix Castor's wisecracking cleverness in the face of weird nemeses makes him the perfect hardboiled hero for a new supernatural noir series.