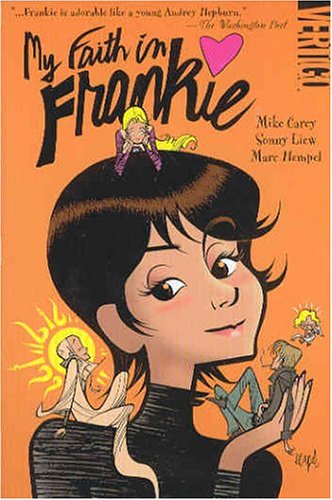 My Faith in Frankie

This delightful, theological satire-as-romantic comedy follows Frankie Moxon, an adorable 17-year-old with a religion of her own. She's the sole worshipper of a god named Jeriven, who's protected her since infancy from all sorts of dangers—especially boys. Jeriven, however, is a jealous god, a trait that becomes evident just as Frankie starts developing some distinctly secular interests. When a handsome young man named Dean (whom Jeriven once raised from the dead at Frankie's insistence) steals Frankie's heart and her faith, the divine jiltee returns to the heavens ("Hast thou ever done it as a swan?" his father booms at him) to plot his vengeance, which involves Frankie's best friend, who's got her own plans for Dean. But there's more to Frankie's new beau than first appears, and the romantic quadrangle becomes a war in the underworld. Liew and Hempel's art—in roughly the style Hempel used for —is loose, frothy and charming; originally in color, its bold designs still look good in b&w, especially in the series of "Frankie & Her Pals" kiddie-comic pastiches interspersed through the main story. But / writer Carey's deft, fast-moving story is really the draw here: it's a fabulously original riff on monotheism and polysexuality, and its comedic value grows steadily until the final, riotous payoff.