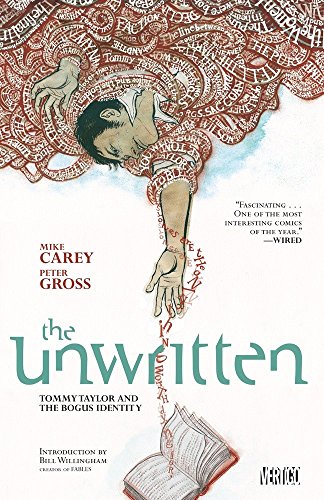 The Unwritten, Vol. 1: Tommy Taylor and the Bogus Identity

A taut thriller that slyly plays off the real-world mania for imaginary ones like that of Harry Potter, Carey's new series undercuts the mythology of such all-pervasive media-hyped creations while at the same time hinting at a brilliantly imagined one of its own. Tom Taylor is the son of Wilson Taylor and the unwilling namesake of the protagonist in his dad's wildly popular 13-book fantasy series. The Tommy Taylor cottage industry of movies, video games, and geek-ridden conventions is given an extra dash of drama by Wilson's having mysteriously disappeared years before, leaving a cynical Tom (who inherited none of his millions) to eke out a grubby living at paid appearances. Carey's story (solidly illustrated by Gross) picks up speed fast when Tom realizes some elements of Wilson's stories might not be made up. By the time the first story is done, Carey has not only created a brisk and addictive story, sketched with crafty allusions to classic literature, but also neatly subverted the celebrity-worship manias of fantasy fandom and questioned the very nature of storytelling itself.