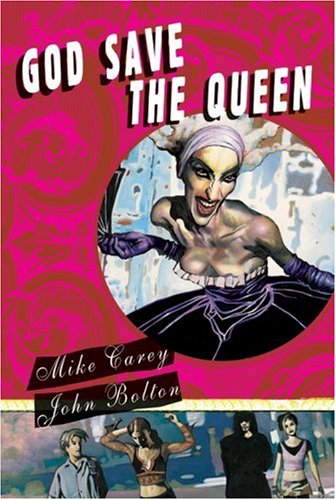 God Save the Queen

In Mercutio compared drugs to Queen Mab, queen of the faeries. In this new graphic novel, rebellious teenager Linda finds out how literal that comparison is. Linda's father has left, and her mother crawled into a bottle months ago and hasn't crawled out. Linda drags a friend out clubbing and plans to "say yes to everything." She meets the magnetic Verian who shows her a whole new high—mixing her blood with heroin. It's only when he takes her to "the border" that she realizes Verian and his friends are from Faerie, and she's unknowingly put herself in the middle of a civil war between Queen Mab and her usurper, Titania. Bolton's fully painted panels are vivid and alluring, at their best when showing the twisted land of Faerie. Carey's story gives equal time to human emotions and the more decadent world of magic and fantasy. Carey ( , ) and Bolton ( , ) revisit territory already familiar from such series as , but put enough new spins on it to make this a treat for any fan of the fantastic.