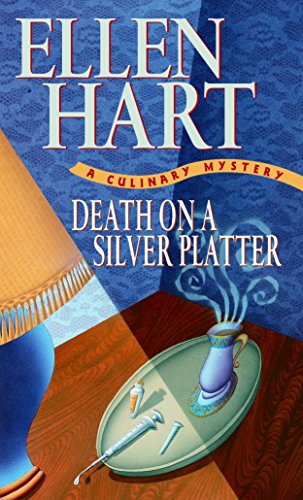 DEATH ON A SILVER PLATTER: A Culinary Mystery

Much more than silver is tarnished in the finale of Hart's intriguing concoction featuring hotelier-cum-restaurant critic-cum-amateur sleuth Sophie Greenway. Sophie has long been friends with Elaine Veelund, who operates the most successful division of her family's Minnesota-based corporation, so when the Veelund family's foundations begin to crumble, Sophie offers her help. In less than 24 hours, Elaine's brother is shot at, her suicidal daughter disappears and her widowed mother, Mad Dog Millie, dies of an insulin overdose. Earlier, Millie had announced her decision to sell Veelund Industries, which gave her family cause for concern as well as motive for murder. Now the family's reputation is on the line as the investigation brings past secrets to light. Meanwhile, Sophie discovers her mother's diary in a locked box, and Hart (, etc.) cleverly serves bits of it as events unfold, keeping readers guessing about its connection to the current goings-on. A surprise denouement and an elaborate recipe for Chez Sophia's Torta Milano round out this surprisingly rich confection and will leave readers craving Hart's next course.