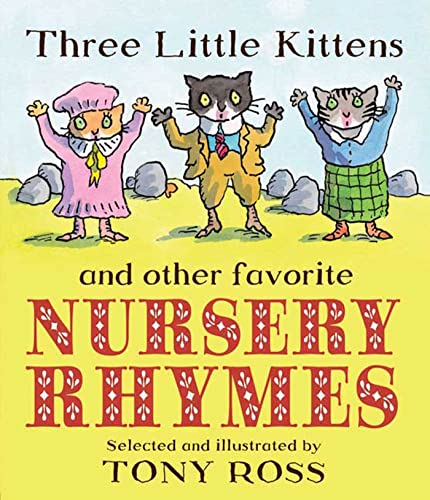 In this British import, Ross ( ) brings his signature wit to 49 classic nursery rhymes. Though Ross generally offers straightforward depictions of the verses' content, expressive characters and playful flourishes abound. The three little kittens' missing mittens reappear on their ears; a cat and mouse steal away with armfuls of bones while Old Mother Hubbard and her dog gaze into an empty cupboard; and the “little piggy” who “had none” jogs on a treadmill while a not-so-little piggy digs into a slab of roast beef. But Ross doesn't shy from the darker sides of certain poems: while some citizens dance to “Ring Around the Rosy,” others are ominously lying on the ground, as a figure wearing a plague mask looks on. And in “Sing a Song of Sixpence,” a blackbird—with a human nose in its beak—is chased by a maid who very clearly needs it back. Still, most of the rhymes have happy outcomes, and the book's large trim size and typeface, as well as the many kid-appealing details throughout, make it a fine story-time pick. Ages 2–6.