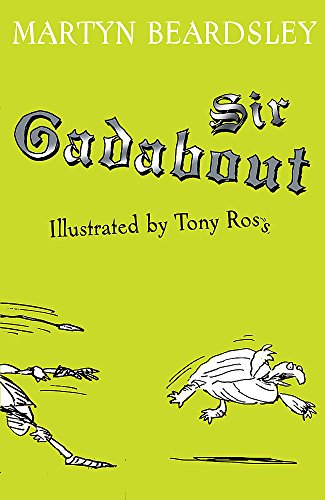 The inaugural volume in a British series, this for elementary-schoolers introduces “the Worst Knight in the World.” Allowed at King Arthur's Round Table only because the monarch feels sorry for him, Sir Gadabout has been voted 's “knight most likely to chop his own foot off in a fight.” When readers first meet him, he is competing against Sir Lancelot in a jousting tournament. As the excited crowd roars the apparently conventional cheer, “Rhubarb, rhubarb, rhubarb,” Gadabout's decrepit horse bucks, catapulting the befuddled knight right out of his outsize armor and straight up into the air. Misadventure is the order of the day as Gadabout embarks on a quest to find the missing Queen Guinivere; Merlin helps out by turning Gadabout's none-too-bright squire invisible and lending his tart-tongued cat, Sidney Smith, to provide some brainpower. Witches, castles that stand on legs and more add to the scenery. Ross's antic line art enhances the high-energy nuttiness of the text. Eight other Sir Gadabout titles are being released this same month. Ages 9-12.