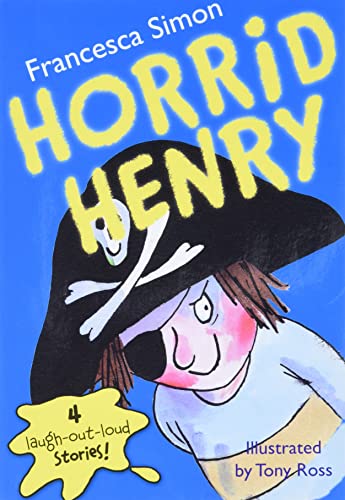 Horrid Henry, star of the enormously popular British series, is finally crossing over to the U.S., and kids who appreciate a mischievous streak will welcome his arrival. In this first book, Henry discovers that being good—like his brown-nosing, vegetable-loving brother, Perfect Peter—can be its own brand of mischief; Henry also disrupts his dance class and fights with his neighbor Moody Margaret (“When he put a spider on her arm, Margaret laughed. When he pulled her hair, Margaret pulled his harder”). In the fourth story, the family goes on vacation, where (as is often the case) Henry's antics work in his favor: on the rainy camping trip, he uses the tent pegs for a campfire, causing the tent to collapse and flood, and forcing his family to comfier accommodations. Henry's over-the-top behavior, the characters' snappy dialogue and Ross's hyperbolic line art will engage even the most reluctant readers—there's little reason to suspect the series won't conquer these shores as well. Pubs simultaneously with , and ; two additional volumes are due in June. Ages 7–10.