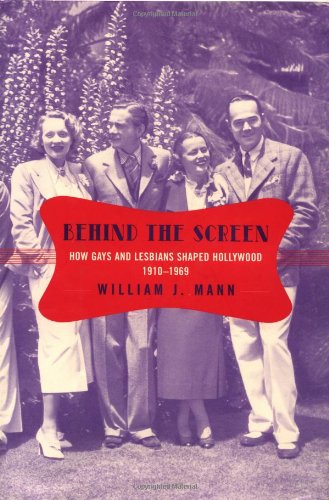 BEHIND THE SCREEN: How Gays and Lesbians Shaped Hollywood 1910–1969

"Come next week if possible. Kathleen giving supper Sunday the 27th. Will ask her to include you and Gary. Want both to occupy one guest room? Answer soon as possible." An insignificant query? Not when you know that it was sent in 1929 to openly gay actor Anderson Lawler, and that "Gary" was none other than beautiful Hollywood newcomer Gary Cooper, Lawler's constant companion. While he doesn't skimp on the details of who was sleeping with whom (Mary Martin and Janet Gaynor; Claudette Colbert and Marlene Dietrich; Cary Grant and costume designer Orry-Kelly), historian and cultural critic Mann () also delivers an astute and groundbreaking study of the impact of gay and lesbian actors, set designers, writers, costume designers, editors and producers on studio-era Hollywood. Without directly correlating sexual identity and artistic production, Mann applies sharp, original research and interviews to re-create the intricate lives and work of "gay Hollywood," offering a new lens for examining the complicated, sometimes contradictory relationship between sexual activity, identity and work. Treating his subjects with great integrity, he argues that it is inaccurate to label stars like Colbert, Cooper and Grant "gay," because they had a far more fluid sexuality. Yet he makes a cohesive and persuasive argument for how their varied sexualities transformed Hollywood and the movies. Mann also covers a wide range of ancillary topics—e.g., the history and aesthetics of set design; the rise of Los Angeles's "pansy clubs"; and the special role of Jews (who were more likely than gentiles to be open about their sexuality). This intelligent and accessible study marks a major step for gay, gender and film studies.