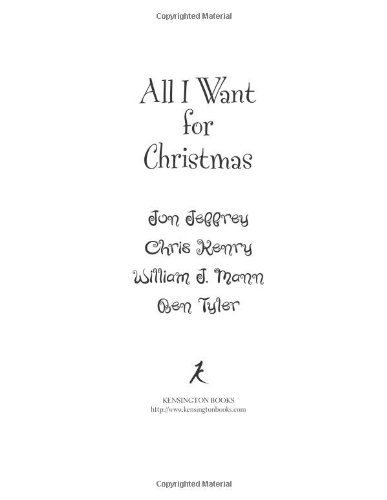 ALL I WANT FOR CHRISTMAS

Four of Kensington's most popular gay novelists contribute novellas to this collection of holiday-themed fiction that should fulfill most stocking-stuffer requirements. In Jeffrey's "He'll Be Mine by Christmas Morning," self-absorbed magazine editor Carson St. John goes to great lengths (including hiring a dating coach to critique his personality traits) to woo Callum Fox, a consumer trends forecaster who recently "pulled a Sandy from " (i.e. transformed himself from a chunk to a hunk). Although Carson's shift from callow to cavalier is abrupt, the writing is witty and fun. Kenry's "An Extra-Large Christmas" is filled with interesting characters—including a retired gay porn star and a famous photographer of sculpted gym bunnies who secretly lusts after a plus-sized UPS delivery man—but the one-joke premise (the photographer thinks he will be ruined if people know he is a chubby-chaser) gets less funny as it drags on. The two best stories are unwrapped last. Mann's haunting and skillful "If You Believe" uses flashbacks to show three friends' evolving relationships with each other when new mates are added. Tyler's bubbly and sweet-natured "Naughty or Nice" features musical-comedy TV star Polly Pepper's efforts to find Mr. Right for her gay son. Polly is a great creation, a raunchier Auntie Mame (with a yen for risqué Internet chat rooms) and a slightly more sober version of 's Patsy and Edina (with best friend/maid Placenta in tow).