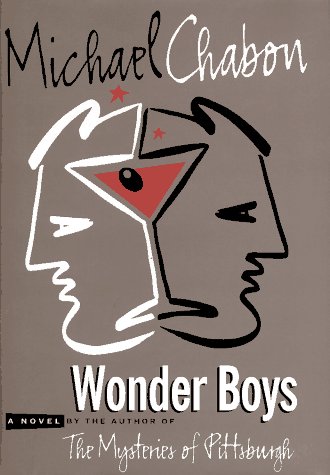 Mixing comic--even slapstick--events with the serious theme of bright promise gone awry, Chabon has produced an impeccably constructed novel that sparkles with inventiveness and wit neatly permeated with rue. The once-promising eponymous ``wonder boys'' are Grady Tripp and Terry Crabtree, friends since college, where they both determined to make their mark in literature. Now they are self-destructive adults whose rare meetings occasion an eruption of zany events. Narrator Grady, a professor/novelist whose unfinished work-in-progress, Wonder Boys, stands at 2000-plus endlessly revised pages, has destroyed three marriages through compulsive philandering and a marijuana habit. Terry is a devil-may-care, sexually predatory editor who has patiently endured Grady's writing block but who tells Grady, when he arrives at the annual literary conference at Grady's small Pittsburgh college, that he expects to be fired momentarily from his job. Grady and Terry, later joined by the campus's newest potential ``wonder boy,'' a talented but mendacious student named James Leer, set in motion a series of darkly funny misadventures. Farcical scenes arise credibly out of multiplying contretemps, culminating in a stoned Grady's wild ride in a stolen car in whose trunk rest a tuba and the corpses of a blind dog and a boa constrictor. All of this affords Chabon a solid platform for some freewheeling satire about the yearnings, delusions and foibles of writers and other folk. Throughout, his elegant prose, breathtaking imagery and wickedly on-target dialogue precisely illuminate his characters' gentle absurdities. The pace of this vastly entertaining novel never abates for a second, as we watch Grady slide inexorably into emotional and professional chaos. Above all, though, this is a feast for lovers of writing and books, with the author's fierce understanding of what Grady calls ``the midnight disease,'' the irresistible, destructive urge of a writer to experience his characters' fates. Author tour. (Mar.)
close
Details