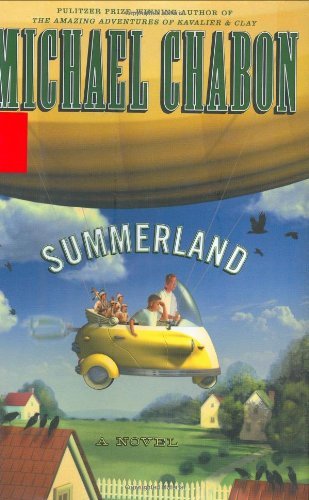 In his debut novel for young readers, Pulitzer Prize winner Chabon () hits a high-flying home run, creating a vivid fantasy where baseball is king. Following the death of his mother, 11-year-old Ethan Feld and his father, a designer of lighter-than-air-dirigibles move to Clam Island, Wash. The island is known for its almost constant rain, save for an area on its westernmost tip—called Summerland by the locals—which "knew a June, July and August that were perfectly dry and sunshiny." In Summerland, Ethan struggles to play baseball for the Ruth's Fluff and Fold Roosters, with dismal results. But here, too, a mystical baseball scout recruits Ethan and escorts him through a gateway to a series of interconnected worlds that are home to magical creatures called ferishers and an evil, shape-changing overlord called Coyote. Ethan and two of his fellow teammates soon accept a mission to save these other worlds (plus the one they live in) from ultimate destruction at Coyote's hand. When his father's well-being is also threatened, Ethan's quest becomes all the more urgent. To succeed, Ethan and his friends must find a way to beat giants, ferishers and others in a series of games where striking out truly has apocalyptic implications. Chabon unspools an elaborate yarn in a style that frequently crackles with color and surprise. He occasionally addresses readers directly, imbuing his tale with the aura of something that has been passed down through the ages. Impressively, the author takes a contemporary smalltown setting and weaves in baseball history, folklore and environmental themes, to both challenge and entertain readers. Images of the icy Winterlands and beasts like the werefox and Taffy the motherly Sasquatch recall C.S. Lewis's Narnia and some of Philip Pullman's creations in His Dark Materials. Devotees of the genre—and of America's pastime—will find much to cheer here. All ages.