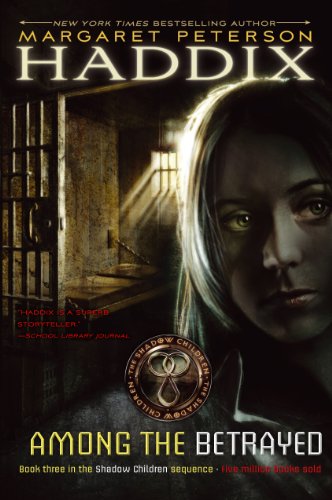 In the third installment of Haddix's series about a futuristic society in which families are forbidden to have more than two children, Nina, a secondary character in , is falsely accused of treason and imprisoned by the Population Police. Her interrogator gives her an ultimatum: either she can get three other child prisoners, illegal third-borns like Nina, to reveal who harbored them and where they got their fake identification cards, or she will be executed. Nina sees a chance to escape the prison (which seems rather convenient at the time) and, taking the prisoners with her, quickly discovers their street smarts. But when their food supply runs out, Nina seeks the boy she knew as Lee (the series' original protagonist). Haddix expertly describes the impact of Nina's upbringing in hiding (she doesn't know how to swim; the sound of students laughing loudly reminds her of the first time she overheard children playing outside—and could not join them). As with the last book, there are dense revelations at the end (including an explanation of Nina's ease in escaping prison), and some of them may test readers' willingness to suspend disbelief. Even so, the author delivers more than enough suspense to keep fans hooked—and to intrigue new recruits as well. Ages 9-14.