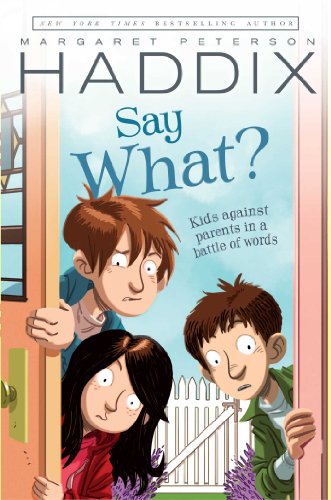 Haddix's (the Shadow Children series) middling story introduces a trio of siblings whose parents suddenly begin to respond to their misbehavior with irrelevant platitudes and other non sequiturs instead of reprimands. To get to the bottom of this baffling behavior, the offspring hatch a plan to be naughty on purpose so as to "gather evidence." Their parents' reactions continue to confound them: when Reed leaves grimy handprints on the wall (normally "a big no-no in the Robinson household"), for instance, his father calmly instructs him to eat his vegetables. Readers may find the explanation for the goings-on rather anticlimactic: the parents are following the advice of a magazine article proposing that "children secretly crave rules and order" and will begin paying attention to their parents when the grown-ups utter the wrong thing at the wrong time rather than the oft-repeated rebukes that children expect to hear. When the kids discover the truth, they declare war, turning the parents' own weapon against them. The turnabout generates some mildly amusing dialogue as the children bombard the parents with typical kid patter (e.g., "But Connor's parents let him"; "Sukie started it"), also out of context, but extraneous conversation and description bog down the pace of what is essentially a one-joke tale. Ages 6-10.